The picture below shows the cylinder head of a Mercruiser marine engine, the effect of expansion due to overheating can be clearly seen in the area circled in red. 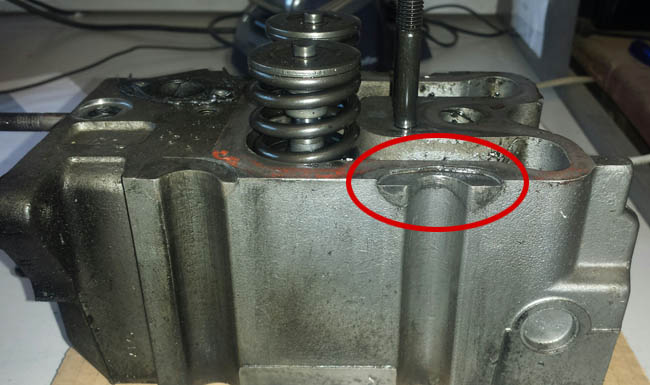 BMW, Mercruiser and Cummins Mercruiser are all derivatives of the VM engine and of course VM’s own brand the MD700. This type of engine employs the use of aluminium cylinder heads which gives an excellent power to weight ratio but when the engines are subject to an overheat situation, this type of damage ensues.

Contrary to popular belief, that the VM Mercruiser engine has an inherent design fault which causes them to over heat, overheating is usually as a consequence of a loss of coolant in the fresh water system. This is usually caused by a leaking of fracture hose, leaking water pump and corrosion where coolant hoses are attached.

Severe overheating usually requires not only the replacement of the cylinder heads, but possibly pistons and the cylinder liners as well due to scoring.

The Mercruiser engine are very sturdy, robust, well built engines which are light and powerful for their class but they do have a few weak points such as valve and valve spring breakages. The aluminium cylinder head is only a weak point if you allow the engine to over heat.

Reconditioning, spare parts, new and reconditioned Mercruiser, BMW, Mercury and Cummins Mercruiser  engines are all available from the VM Diesel Specialist. If you need spare parts for your Mercuiser engine please give us a call we are very happy to help.  We stock a vast range of new and used mercuiser parts and if you have had difficulty sourcing parts elsewhere, we are very likely to be able to help.