As emission regulations tightened, along with the need for better fuel economy, the introduction of direct fuel injection with electronic control brought about the introduction of the VM Motori MD700 Di-tronic range of engines.  Direct injection is a means of injecting and burning the fuel in a bowl shaped recess in the top of each piston.  The better fuel economy and improved emissions of a direct injection diesel engine is the result of the fuel being burnt in the cylinder where it has access to more air providing better combustion, rather than the confines of the relatively small pre-combustion chamber as found in an indirect injection diesel engine.

The MD700 range of engines brought about better power levels and the increase in power was handled by improving cooling with up-rated heat exchangers.  What started out as the 3.6 litre 150 horse power, 6 cylinder BMW marine engine, then grew into the 4.2 litre 220 horse power indirect injection diesel engine, which then progressed onto direct and common rail fuel injection producing up to 345 horse power.  Even after all these changes and power output increases, this straight 6 engine had grown very little in size with a weight increase of little more than 70 kilos over the early 150 horse power models. Many internal components were modified to handle the extra power.  A true high performance light-weight diesel engine was now available.  Modifications to the cylinder heads were made which offered more resistance to cracking and the MD700 range was truly a superbly reliable high speed, light weight marine diesel engine. 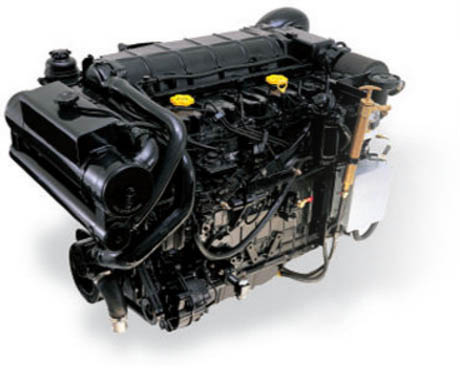 4 and 5 Cylinder VM Marine diesel engines follow the same pattern as the straight 6, the 4 Cylinder starting out as 2.0 litres and ending up as 2.8 litre engine.